3Sixty Strategic Advisors is delighted to announce the launch of a new project, The BRI Dialogues, in partnership with al Sabah Programme for a deep dive into the changing nature of the international system, analysis of the growing global role of East Asia, and a fuller understanding of the role of China and the Belt & Road Initiative (BRI) as the linchpin of the emerging order.

Countries of East and Southeast Asian regions have emerged as major hubs of manufacturing and trade, finance, innovation, technology, stamping their authority on the world economy. Today, they are also purveyors of new cultural norms for the world to consume at leisure.

The pendulum of time has been marking the steady shift in the global economic balance of power Eastwards ever since, and today we stand on the cusp of the transformative change being generated and directed by Asia’s largest economy, China. What China does and says matters now more than ever before and that is why this transition of power at the global level, from the thus far dominant power of the United States to a lesser known economic giant as China is proving unsettling, provoking partisan commentary and stoking flames of a new rivalry. The need to understand China and China’s conduct and policies has never been greater.

Understanding and making sense of the course of history in the C21st is centred on understanding China and appreciation of the complexity of China’s policy drivers.

And that is where we come in…welcome to BRI (Belt Road Initiative) Dialogues.

We have watched China closely and will be charting its growing influence and role in the post-Covid-19 world through its much-vaunted Belt and Road Initiative – its signature foreign and economic policy vehicle which is steadily and relentlessly redrawing the political economy and geopolitical frontiers of Eurasia and beyond. This multi-faceted, multi-fronted, and multi-pronged Initiative promises to transform the main hub of this century’s economic powerhouses. 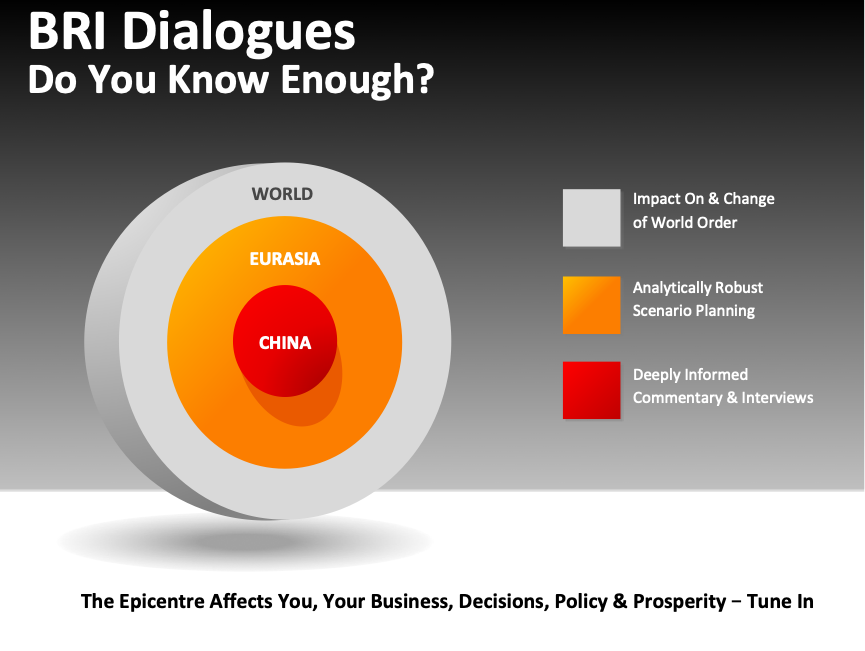 To follow and partake in this transformative road we need to deepen and broaden our understanding of the driver, and as the world turns to China, overtaking the United States as the EU’s main trading partner in 2020 for example, we need to chart our own route to deeper engagement with China.

As the world begins to shake off the burden of Covid-19 in the course of 2021 and 2022, it will be witness to the role being played by the major global economies in leading the world out of its grave humanitarian, socio-economic, and geopolitical crises. In this new world order, China will play an even greater role – in the economic recovery of the Western countries and in the rejuvenation of the Global South. Where China positions itself, and how it goes about fulfilling what its leaders see as their historic mission, will determine the course of history this century, just as their ancestors did in a by-gone age.

The world is fast changing. No time to waste if we are to keep our country on the path of prosperity for another 100 years.

Through a series of conversations, dialogues, with the best informed individuals from around the world, we aim not only to shed new and vibrant light on the workings of China as Eurasia’s dominant state, but also on the making of its BRI – the greatest experiment in driving transformative economic change in history.

Do you know enough?